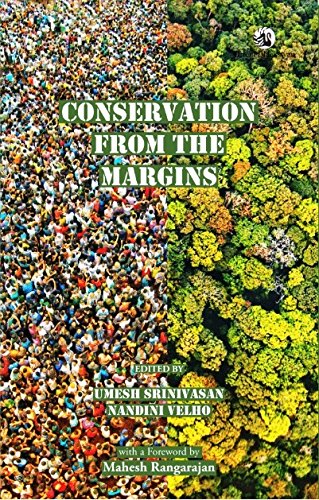 The diverse landscape of India is home to globally important wildlife species and habitats. However, a rapidly growing economy and human population, along with socio-political issues such as ethnic and political marginalisation, have serious, if often unrecognised, impacts on this vast biodiversity.
While some of India’s conservation issues the tiger and elephant conservation, mining and global warming have gained currency in media and policy discourse, several others remain confined only to the academic world of conservation biologists and environmental activists and rarely enter either public consciousness or public policy. Conservation from the Margins talks about some of these neglected conservation issues.
Conservation and environmental degradation cannot be confined to domains of only the state and activists, communities are also actively engaged with their natural surroundings. the essays in this volume do not merely analyse the ecological aspects of these environmental problems unidimensionally, instead, they examine the complex intersection of the natural with the social.
The chapters range from the realities of illegal wildlife trade in India to the impact of naxalism on the Palamau Tiger Reserve and from conservation in marine fisheries to identity politics in the Gangetic fisheries. the result of extensive fieldwork done by some of the finest biologists and sociologists across the country, the book highlights the personal experiences of the scientists to understand and resolve the issues.
While the stories told are specific to India, the overarching questions this volume raises about conservation are relevant to the developing world, particularly to Asia, Sub-Saharan Africa and Latin America.
This volume will be of interest to undergraduate and postgraduate students and scholars of environmental studies, sociology, ecology and conservation.
Buy the book Conservation from the Margins from Ideakart.com.