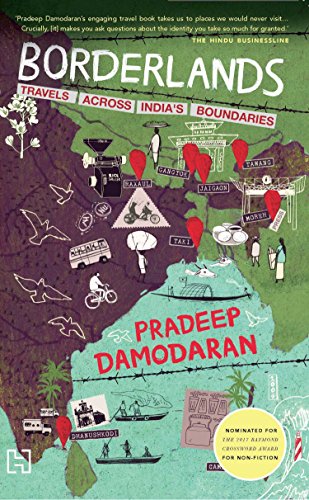 For most residents of India’s bustling metros and big towns, nationality and citizenship are privileges that are often taken for granted. The country’s periphery, however, is dotted with sleepy towns and desolate villages whose people, simply by having more in common with citizens of neighbouring nations than with their own, have to prove their Indian identity every day.
It is these specks on the country’s map that Pradeep Damodaran rediscovers as he travels across India’s borders for a little more than a year, experiencing life in far-flung areas that rarely feature in mainstream conversations. In Borderlands, he recounts his encounters with the war-weary fishermen of Dhanushkodi at the southernmost tip of Tamil Nadu, who live in fear both of the Indian Coast Guard and the Sri Lankan navy; farmers in Hussainiwala, a village on Punjab’s border with Pakistan, who are unwilling to build concrete houses for fear of them being destroyed in the ever looming war. Tamil traders of Moreh, a town straddling the Manipur Myanmar border, who pay bribes to at least ten different militant organizations so they can safely conduct their business; and ex-servicemen in Campbell Bay who were resettled there three generations ago and have long been forgotten by the mainland.
From Minicoy in Lakshadweep to Taki in West Bengal, Tawang in Arunachal Pradesh to Raxaul in Bihar, Damodaran’s compelling narrative reinforces the idea that, in India, a land of contrasts and contradictions, beauty and diversity, conflict comes in many forms.
Buy the book Borderlands: Travels Across India’s Boundaries from Ideakart.com.