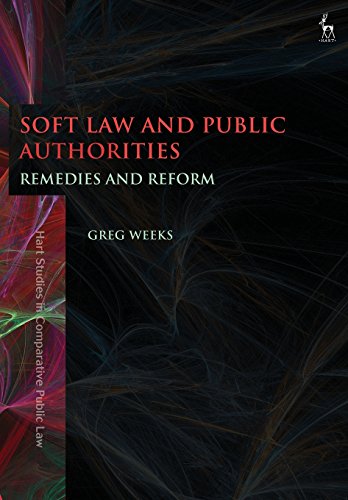 This book considers the phenomenon of soft law employed by domestic public authorities. Lawyers have long understood that public authorities are able to issue certain communications in a way that causes them to be treated like law, even though these are neither legislation nor subordinate legislation. Importantly for soft law as a regulatory tool, people tend to treat soft law as binding even though public authorities know that it is not. It follows that soft law’s `binding’ effects do not apply equally between the public authority and those to whom it is directed. Consequently, soft law is both highly effective as a means of regulation, and inherently risky for those who are regulated by it. Rather than considering soft law as a form of regulation, this book examines the possible remedies when a public authority breaches its own soft law upon which people have relied, thereby suffering loss. It considers judicial review remedies, modes of compensation which are not based upon a finding of invalidity, namely tort and equity, and `soft’ challenges outside the scope of the courts, such as through the Ombudsman or by seeking an ex gratia payment.
Buy the book Soft Law and Public Authorities: Remedies and Reform (Hart Studies in Comparative Public Law) from Ideakart.com.

NCERT text book for school.
You can buy the book from Ideakart.com.